My first guitar instructor attempted to teach me Jazz when I was a kid. I wasn’t all that interested in Jazz, but I practiced.

Side note: This kid actually looks a little like my son, who has, as of yet, never expressed any interest in holding a guitar. Alas.

It was clear after a while that I had plateaued. Fortuitously, my teacher moved across town, and the lesson arrangement ended about the time it had become obsolete. In the months that followed, my playing ability EXPLODED.

I learned more in the few months that followed, as I was finally free to work through the information and instructions as they spilled back out of me, than in two years that preceded them.  I looked approximately like this: 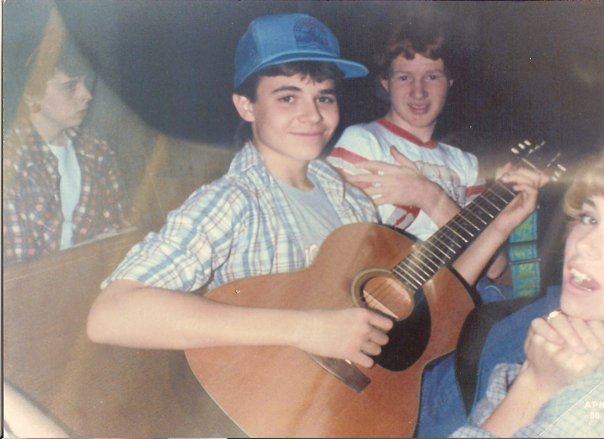 Later I studied classical guitar, but not for very long. I slid into young adulthood with a few jazz chords in my pocket, and some proper classically-induced structure and dexterity. Plus, I could solo like a BOSS, so I was determined to join the next Led Zeppelin. How hard could that be? My first band, a batch of high school friends, never took off. The next band never even made it to a second rehearsal. The other guitarist didn’t understand rests… Soeverythingheplayedwaslikealongrunonsentencewithnobreaks.

A few months later, I ended up in a cover band with some guys who were a few years older. We had a casual run playing gigs about once a month on average, for about four years or so. It was in that band (which had no name) that I learned how to apply all those years of music lessons (I wanted to call us “Proof of Purchase”). I learned to sing harmonies, and actually became one of the principal lead singers (The other guitarist didn’t like the name, and was bossy). I learned how to write and arrange, to record and produce (Seriously, he wanted us to be called “Cornerstone,” or something cornball like that). It was then that I realized I was in a dead-end band (which still had no name, and obviously tended toward bad taste). The other guys were hobbyists at best, and weren’t interested in turning from their career plans to make music with a bozo like me.

I was the ripe old age of 22 when it ended. The band had a meeting, decided on a hiatus, and then started back up again without me. I was more driven to create and perform, and they were more interested in just having fun. I became obsolete, and found the freedom to pursue my own music (Quite honestly, I had no intention of going back). So I spent the better part of a summer recording some songs I had written, using thoroughly lousy equipment. It turned out to be a surprisingly good recording. Six months later, I started attending a church I had visited a few times with my college girlfriend. I ended up playing in the worship band, and this was right when I was reinventing myself as a guitarist. For about 18 months, I learned to be a sideman, developed my tone, and experimented with new ideas. While I did that, I met two other guys who were interested in starting a band. So we started a band, and kept it going for about 5 years. Eventually the drummer got bored with the fact that we didn’t pull in huge crowds like some of his newer gigs. He bailed, and that was really the end of that. That project had become obsolete, and I became free to explore new ideas again.

I started a surge of writing and recording new songs. By that time, I was a sideman in a few bands, and got a few of the other players to help me record. My main gig built up to the biggest thing I was ever part of, and then right at the pinnacle, my singer died of a rare disease, leaving me obsolete without her voice to carry the music we wrote. After some pain, I found the freedom to set that down and move on.

Since then, I’ve produced a couple of albums, done different projects, and written music of my own again. I got involved in the music of another church, directing the music in one of their services. Over time, I’ve moved out of a music-director type role into a broader creative director type role, I’ve become obsolete in the music ministry, and it frees me up to explore new options.

It was while that role-shift was happening that one of the music teams wanted to cover Queen’s “I Want It All.” 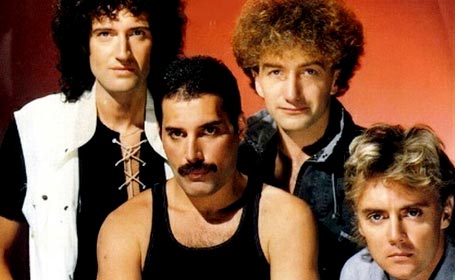 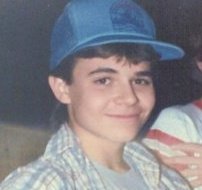 One of the tricks to this is Queen’s propensity for triple or quadruple-stacking each vocal harmony part. So I constructed a backing track to fill in some gaps, and we performed it. Not one to waste an effort, I went ahead and casually worked on doing my own full cover of the song, which you can hear, HERE:

Why? Because I wanted to do something ambitious for fun. Because I can.

Right now I’m a grown man who plays music in America’s watering holes and houses of worship. Dudes like me… We’re not cute young things who think we’re bound for stardom. We’re normal family men. We’re the main buyers of musical products. We’re the core of the whole US economy! We’re the ones who hold the songs together when the church music sounds like junk. We’re the ones who MAKE the band sound good. And we’re the ones that change the whole atmosphere when we arrive or depart. AND, when we discover we’re obsolete, we’re the ones who discover new sounds and expressions, and make new and better music when we’re free.

Get obsolete. Leave the system. Find freedom. Leave the rest of them turning the crank on the same old machine.

Also, you should agree that “Proof Of Purchase” was a great band name. Humor me.

What would it look like to embrace obsolescence, get free, and discover your next new awesome step as an artist or musician? What keeps you where you are? Are you in any danger of running out of new ideas? How do you find new methods of creativity in the same sandbox?